Create an Account - Increase your productivity, customize your experience, and engage in information you care about.

The first known water project was the construction of an artesian well about seven miles north of Altus.  That well is still in use today but the pipeline was never completed to bring water to the City.

In 1910, the Altus Reservoir was constructed to serve as a primary source of water.  The lake was 116 acres and was located adjacent to the Water Treatment Plant on the north side of Altus.  A newspaper article reported the following:  “Altus is spending $300,000 on its municipal water supply …where the water is pure and soft, and unlimited in quantity, where the reservoir forms a beautiful lake…surrounded by land belonging to the city, which will be converted into a beautiful park and playgrounds for the public in general and children in particular.”

Altus grew slowly during World War I but benefitted from the subsequent growth of agriculture in Jackson County.   The agriculture boom was prompted by the construction of the Lugert-Altus Lake in 1927 about 18 miles north of Altus.  The lake was impounded by a concrete buttress dam built by the Ambursen Hydraulic Construction Company.   At this time a “stave wood pipe” was installed to convey Lugert water to the City of Altus.  Made of red wood from California, the pipeline was plagued with leaks.  Surprisingly, the wood held up well but the metal bands that sealed the pipe joints corroded.

This photograph shows the newly completed “Ambursen” dam at Lake Lugert-Altus in 1927. 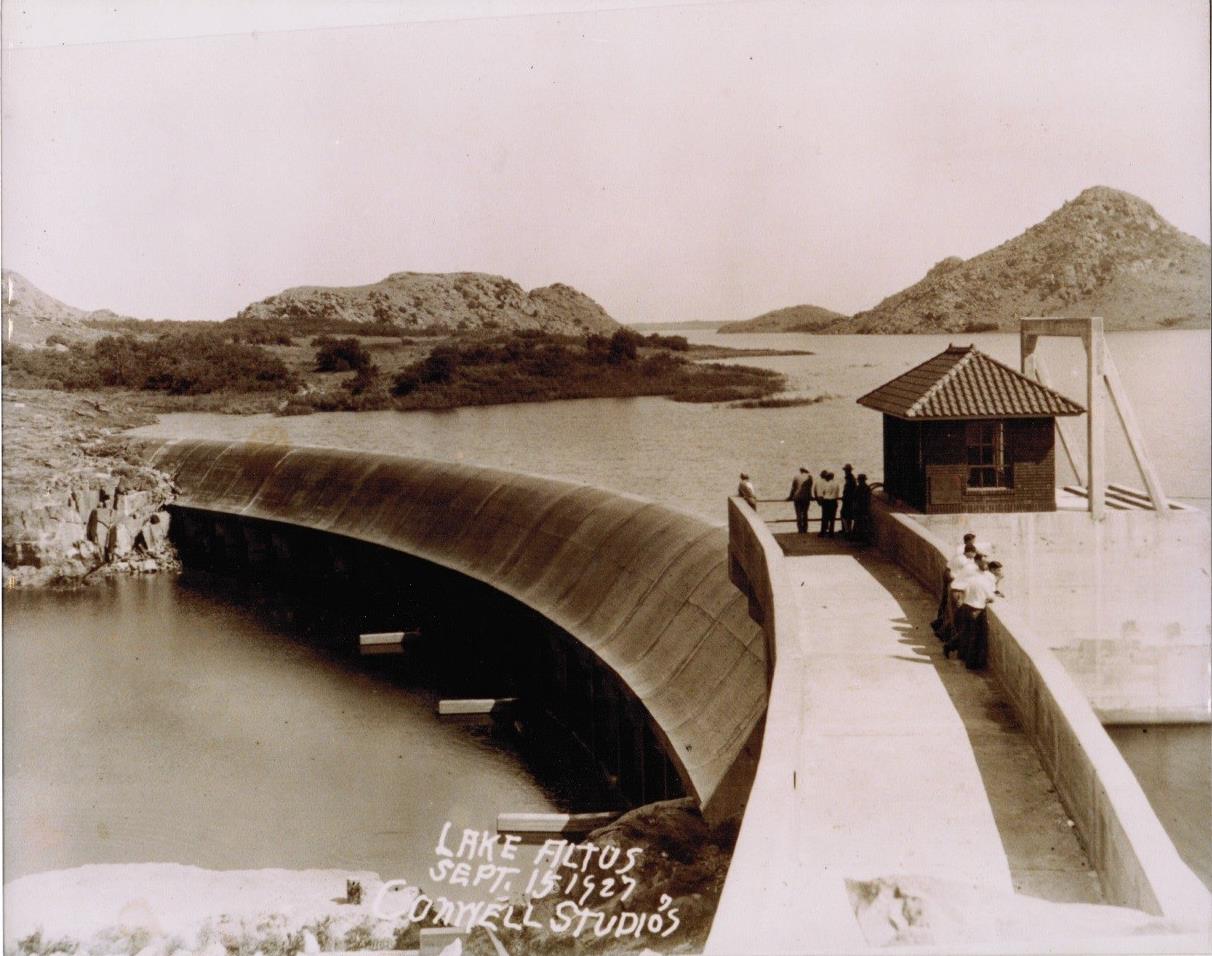 
In connection with this effort, the City built its first Water Treatment Plant that was completed in 1927.

In 1937, the Altus City Reservoir was expanded by the construction of the eastern basin which covers 24 acres.  A fish hatchery was also constructed on the north edge of the eastern basin.  Several pipes ran north through the berm to feed water into small hatching ponds.   This work was done by the Works Progress Administration (WPA) which was a depression-era work program created in 1935 as part of President Roosevelt’s New Deal. 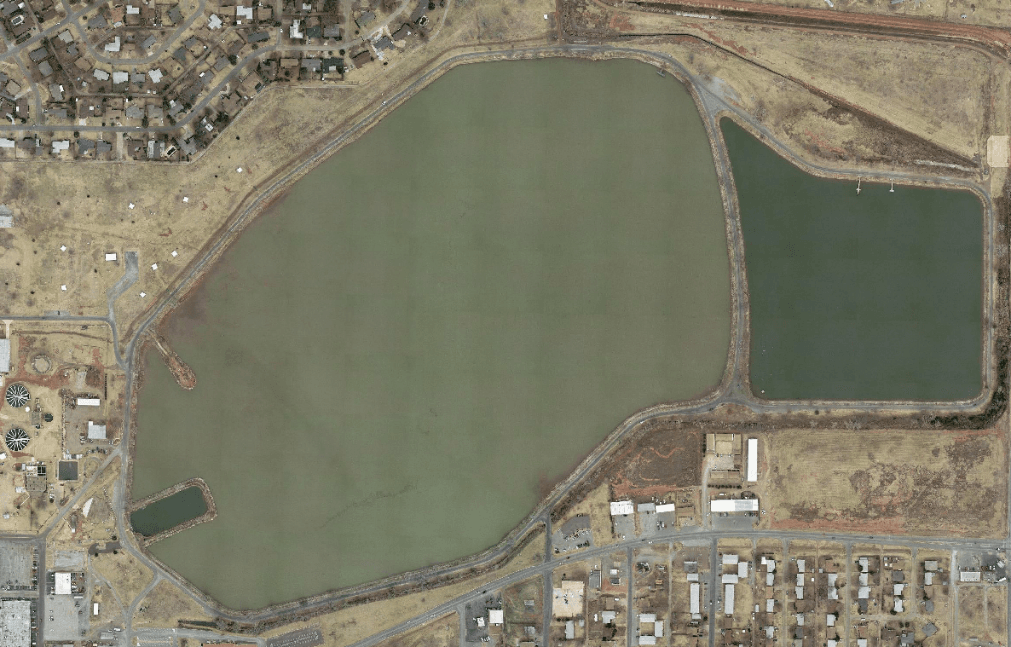 In 1947, the Lugert-Altus dam was replaced with a concrete gravity dam that substantially increased the storage capacity of the Lake.   At this time, the first canal from the lake was completed.  Over the next several years, more canals were be built.  By 1953 the irrigation system had more than 200 miles of canals and was managed by the Lugert-Altus Irrigation District.

The main canal runs within 50 feet of the Altus Reservoir so a connecting pipe with gate valves was installed to allow Lugert-Altus water to flow into the city reservoir.  This served as a means of replenishing water during times of drought.  The City paid $1,080,000 towards the irrigation system construction.

In 1964, the City of Altus began construction of well fields in the Seymour Aquifer just over the border in North Wilbarger County, Texas.  18 wells were installed which became the primary water source for the public water supply.    This project cost about $2,000,000.  The wells were on private property (most at the Round Timber Ranch) and long-term lease agreements were executed.

In 1975 the Tom Steed Reservoir was built by the U.S. Bureau of Land Reclamation in Kiowa County.  Additionally, a 36-inch pipeline 23 miles long was constructed to bring Tom Steed water to the Altus Water Treatment Plant.   Use of the well fields continued and well water was blended with Treated water from Tom Steed for the Altus water supply. Also in 1975, construction was completed for a new Water Treatment Plant which was a mixed media filtration plant with primary clarifiers and chlorine disinfection.

After about 30 years of operation, the wells were shut down due to increasing maintenance costs. 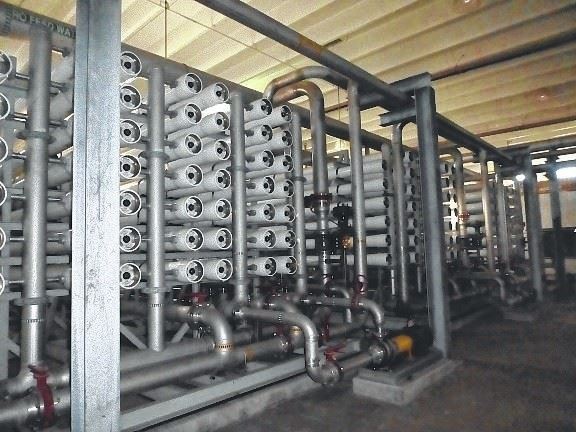 From 2011 to 2015, SW Oklahoma suffered from an extreme drought.  Lugert-Altus Lake and the Tom Steed Reservoir dropped to alarmingly low rates.  Tom Steed Reservoir dropped to 19% capacity.  In 2013, the Altus Water Task Force was created in part to promote drought resilience and explore additional water sources.  The Task Force is a combined effort of the City, the Air Force Base and the Chamber of Commerce.

In May of 2015 record rainfalls caused severe flooding throughout much of Oklahoma and Texas.  It was the wettest month on record.  While Altus had only minor flood damage, the rainfall filled the reservoirs.  Tom Steed and Lugert-Altus were filled in less than 30 days.

In 2015, the City of Altus purchased a 240 acre tract of land known as the Holloway Tract where wells No. 15 and 16 were located.  The City also renewed the lease agreement with the Round Timber Ranch to resume production.  Seven wells were rehabilitated and placed back into service in February 2016.
Stay Informed
Sign up to receive notifications
Pay Utility Bills Online
Easily pay your bills online
Report a Concern
Let Us Know
Minutes and Agendas
View Minutes and Agendas
Sports Registration
Sports Registrations Available
[]