Altus will hold elections for the following local offices beginning with a primary election on Tuesday February 14, 2023.

Offices up for election will be:

All offices for this election cycle will be elected "at-large" - meaning that all registered Altus voters can vote for each candidate, regardless of which ward they reside in.


Candidates for the 2023 election must file at the Jackson County Election Board during the filing period of December 5-7, 2022.

**During renovations of the Jackson County Courthouse, all County Offices are currently housed in the Washington School building located at 311 E Cypress Street in Altus. Phone 580-482-2370

If you have questions about this election, or elections in-general, please contact the Altus City Clerk's office at 580-481-2216, or by email.

Local elections are generally held in conjunction with state and federal elections whenever possible. 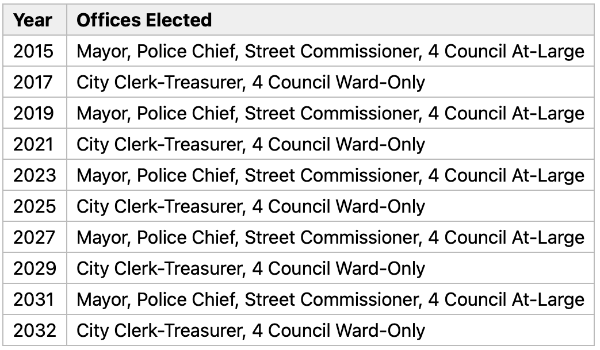 Ethics reporting forms will be included in the election packets picked up at the Altus City Clerk’s Office.  Campaign and election information (including sign regulations) will be in the packets.

Questions regarding campaign reporting or financial disclosure should be addressed to the Oklahoma Ethics Commission ethics@ethics.ok.gov; 405-521-3451; or at 2300 N Lincoln Blvd. B-5, Oklahoma City between 8:00 a.m. to 5:00 p.m.

All forms for local elections are to be filed with the Altus City Clerk.